Our next event, “Nights in the Atacama Desert” (Celestial Photography) with celestial photographer extraordinaire Ted Wolfe, will be on Wednesday, February 27, 2019 at 5:30P, at Bentley Village (850 Retreat Dr. in Naples, FL).  The cost is $36 per person.

Ted Wolfe has been looking up at the night sky through telescopes for over 40 years. He has been an astrophotographer since 1998, when he constructed one of the first remote, robotic, amateur observatories in southern Florida. Recently, he moved his telescope to an extremely dark site at 8,000′ in the Atacama desert in northern Chile. 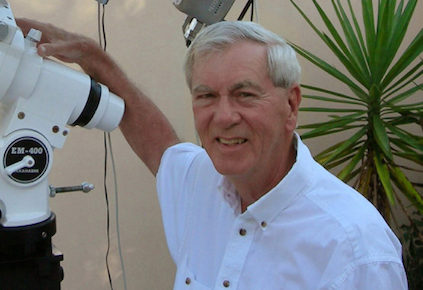 Since 2000 over 20 of his images have been published in Astronomy Magazine or Sky & Telescope.

Large scale exhibits of his space pictures have appeared in a number of science museums, universities & libraries. A one-man exhibit of over 30 examples of his work ran for a 20 month period at the Kennedy Space Center at Cape Canaveral. His exhibits have also appeared at the Miami Museum of Science, the National Roger Tory Peterson Institute, the Tampa and Orlando Science Museums, the Hesburgh Library at the University of Notre Dame, and other sites. His work is on permanent display at the Center for Space Studies at the University of Florida, and the Jordan Science Center at the University of Notre Dame.

Currently, his “Journey to the Sun” exhibit is beginning a tour of selected “Challenger Centers for Space Science Education” across the country.

Ted has also written over 70 monthly columns for the Naples Daily News since 2010. He is a member of the Board of Directors of the Everglades Astronomical Society, and actively participates in their various public outreach programs on astronomy.